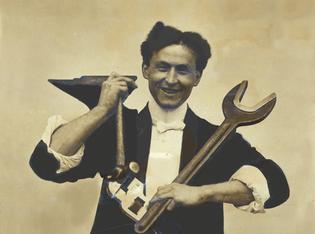 Houdini died on Halloween, 1926 from peritonitis caused by a ruptured appendix. For years, it has been assumed that a blow to his abdomen from an overzealous college student killed him. Houdini was known for his tremendous physical condition, and could withstand blows to the abdomen by tensing his muscles. While performing in Canada, however, he was challenged by a student who didn't give him time to prepare for the punch. Whether or not the blow ruptured his appendix, it did not cause the appendicitis, which is a bacterial infection. Houdini met his untimely death on October 31, 1926, at Grace Hospital in Detroit, Michigan. (The most common misinformation about his death resulted from the 1953 Houdini movie starring Tony Curtis, in which Houdini dies during an underwater escape.)

Houdini is buried in Machpelah Cemetery in Queens, New York.

Harry Houdini: From Appleton to the World

All images on this page courtesy of the Sidney H. Radner Collection.

The Official Houdini Seance, held each year since the magician's death in 1926, originated from Houdini's efforts to expose fraudulent mediums. He claimed that if there were truly a way to contact the living after one's death, he would do so. He set up a code with his wife Bess, who faithfully attended the annual seances and awaited his return for 10 years, after which time she gave up. The séance is held each year in a location with a significant connection to Houdini's life.

Although Houdini claimed to have been born on April 6, 1874 in Appleton, Wisconsin, he actually was born on March 24, 1874 in Budapest, Hungary. Recently discovered ship's logs indicate that the Weiss family moved to Appleton when Houdini was a toddler. The family came to America because of a job opportunity for Houdini's father, Rabbi Mayer Samuel Weiss, who became Appleton's first rabbi. While Houdini wasn't born in Appleton, he fondly referred to it as his hometown.

Buster Keaton claimed that Houdini coined his nickname. After seeing some of Keaton's work falling down a staircase, Houdini called him "a real buster," and the name stuck.

Houdini was known as a debunker of fake mediums and spiritualists. His interest began during his bereavement after the death of his mother, Cecilia Weiss. Because of his background as an illusionist, he recognized the techniques of mediums who claimed to have contacted the spirit world. Houdini became a crusader against these charlatans who bilked grieving families of their money. He frequently attended séances in disguise in order to expose the mediums.

Arthur Conan Doyle, creator of the famous Sherlock Holmes character, was a contemporary and admirer of Houdini's. Ironically, Doyle was known for the logical explanations in the Holmes stories, yet he truly believed that Houdini's escapes and illusions were supernatural phenomena.